New home for the holidays; house damaged by October 2021 flood replaced in Crisfield

CRISFIELD — When Robert Haugh told his wife Myrtle there was water seeping in from around the fireplace she figured the remedy would be to throw down a few towels.

Soon after, while seated …

New home for the holidays; house damaged by October 2021 flood replaced in Crisfield Crisfield-Somerset County Times photo
From right, Kim Hopkins, construction manager for the Eastern Shore Long Term Recovery Committee holds the candle, homeowner Myrtle Haugh holds her phone so her husband Robert can hear the dedication ceremony with Pastor Phil Huber next to her as a Mennonite choir at left sings during the blessing of the Haugh’s new home on Byrdtown Road. 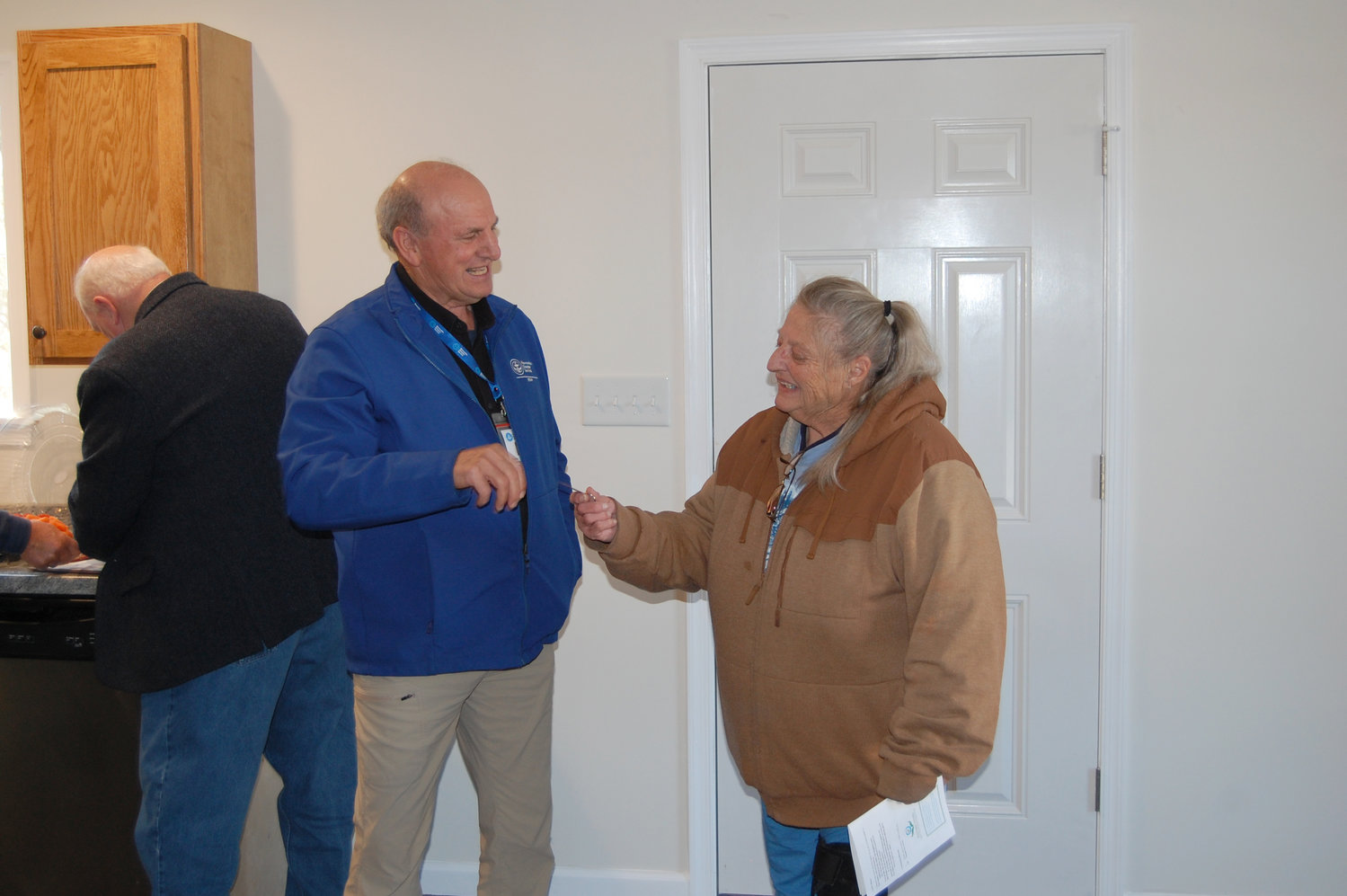 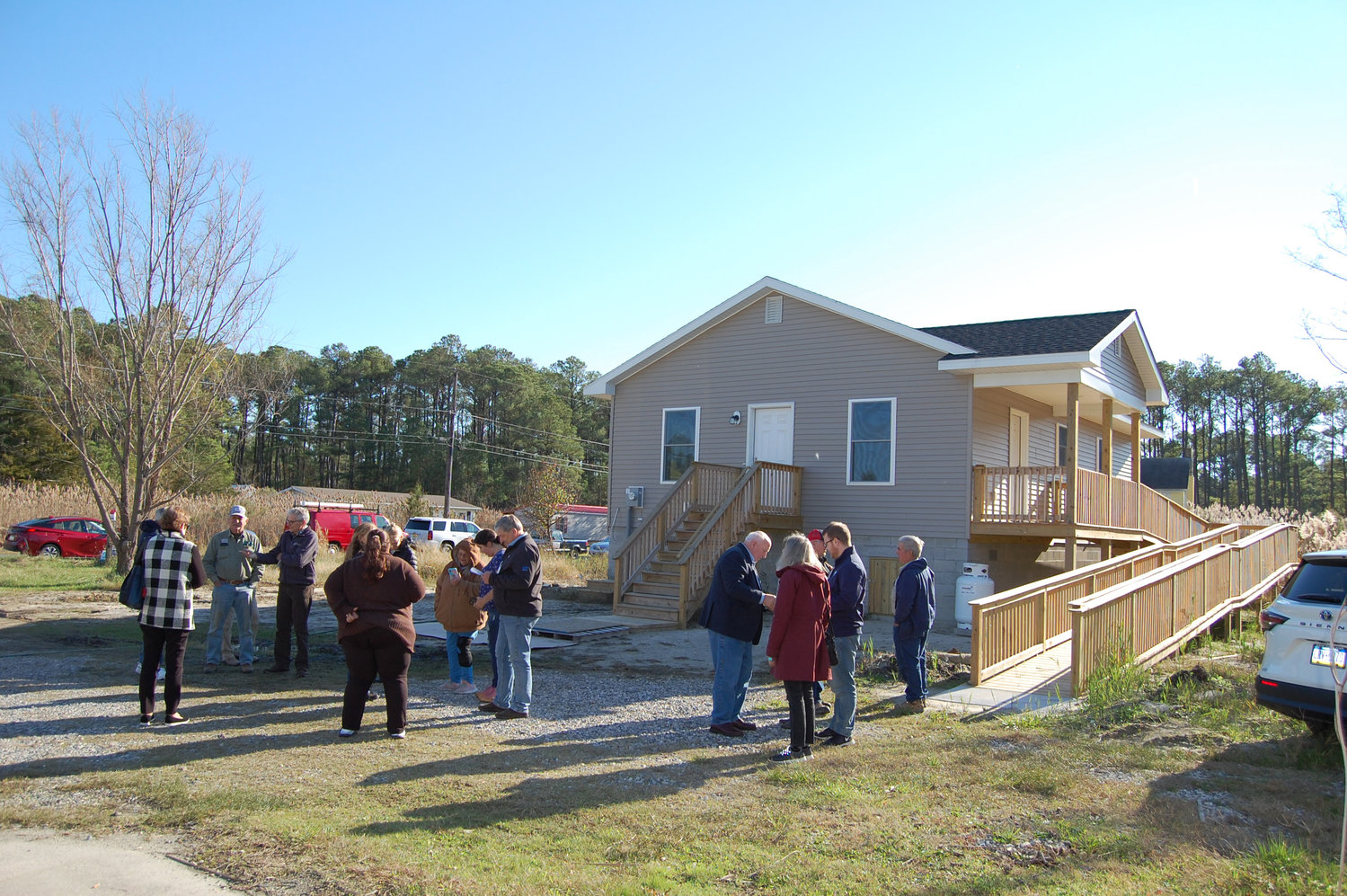 Crisfield-Somerset County Times photo
Those taking part in the dedication and blessing of the newly-completed Byrdtown Road home of Robert and Myrtle Haugh gather outside before the start of the ceremony. An extreme flood tide from Oct. 29, 2021 forced them out of their house and renovation was not possible. The former Somerset County Long Term Recovery Committee that worked after superstorm Sandy to rebuild, elevate and renovate hundreds of houses reorganized as the Eastern Shore LTRC and with major support from Mennonite Disaster Relief and partner agencies it committed to rebuild six and now possibly eight homes wrecked by last year’s flood.
Posted Tuesday, November 29, 2022 10:49 pm

CRISFIELD — When Robert Haugh told his wife Myrtle there was water seeping in from around the fireplace she figured the remedy would be to throw down a few towels.

Soon after, while seated at the computer, her foot started to get wet, and she quickly realized, “We’ve got a problem.”

The Haugh’s first home together on Byrdtown Road had survived past floods, but this one two days before Halloween in 2021 was different as it came into the house.

“When we walked out the back door, water was above my knees,” Mrs. Haugh said. The entire road was flooded as they headed to a motel for the night.

Afterward upon inspection, the old house was left in such a state that at its present elevation restoration was impossible. The only cost-effective long-term solution would be to rebuild.

The Haughs, however, were not in a position to do that and were not alone as there were other homeowners in Crisfield who suffered flood damage from this unnamed event nine years after superstorm Sandy.

But unlike Sandy that battered and soaked much of Somerset County and the East Coast the volume of damage here was not enough to trigger assistance from FEMA or other federal or state agencies.

It was after Sandy that the Somerset County Long Term Recovery Committee organized. This collaborative of faith-based and charitable organizations through its partners built some 25 new replacement homes, elevated another dozen and repaired or made more resilient over 250 others.

While committee members had voted to dissolve in January 2020, the paperwork was never finalized so leaders old and new regrouped and changed the name to the Eastern Shore Long Term Recovery Committee to not only help Somerset County but other locations like Dorchester County that suffered from the same extreme tidal event.

Mennonite Disaster Service (MDS) agreed to build six new houses and pledged $300,000 if the Long Term Recovery Committee could match it. The County Commissioners led the way with a $150,000 allotment and through many partner organizations the goal was met.

Four houses started things off — three in the city limits and the Haugh home, which was the first one ready for occupancy.

Six days before Thanksgiving it received a thorough blessing and dedication for each room and those who will occupy it. MDS Operations Coordinator Larry Stoner said when he first met the Haughs in their driveway they talked about the possibilities but “it was a dream at the time.”

“Now that we’re standing in it, it’s pretty incredible.” He passed Mrs. Haugh the keys, saying he’s sure they have memories of their former home and it will be difficult to see it razed, “but it’s time to start building memories in this house.”

Gifts for the new homeowners include a Bible and a quilt for hanging on the wall, made by the women of MDS. “This wallhanging has many prayers over it,” said Kevin King, executive director of MDS, a housewarming gift to celebrate the family’s return to a new home.

“Today’s a bright day in Crisfield, Maryland, and it’s gotten brighter because of this event, thanks be to God,” Mr. King said.

Pastor Phil Huber, disaster response coordinator for Lutheran Disaster Response, said his role with the ESLTRC as it was with its predecessor is to coordinate the expertise that a community needs to put together these homebuilding projects.

LDS works in partnership with other groups, and it’s important that he can list a wide-range of groups that are on board when soliciting financial contributions.

“It’s a place where the church…and the faith community” come together, he said. “I’ve never once had a Mennonite ask me what our Lutheran stance was on baptism and Holy Communion before we could work together.” “We simply work together and carry out Jesus’ mission in the world to care for others.”

Commissioner Laird expressed his appreciation to the leaders of the recovery committee but most to the volunteers “who stretched this $150,000” for what may now be up to eight replacement homes. “I want to thank everybody,” he said.

Mayor Darlene Taylor said even though this house is outside the city limits this work “is so inspiring to us.” She said this was the first dedication she has attended “and was extremely moved.”

“I know you’re building homes, but really, you’re changing lives.” “I’m so happy for you.”

Mrs. Haugh was holding her phone on speaker so the program could be heard by her husband Robert who was in the hospital. She said when their home was destroyed, “it destroyed part of me.”

“I just can’t believe this is happening. Everybody says about God taking care of you. He really took care of us this time, otherwise we would’ve had to probably leave because we couldn’t afford anything else.” “Bless every one of you for helping us.”

On the phone Mr. Haugh could be heard saying, “Thanks to everybody,” and Mrs. Haugh said she can’t wait for her husband to get home so they can move in together.

Left to accomplish is demolition of the old house, which contractor A.J. King is lined up to do. “It’s going to be the hard part,” Mrs. Haugh said, watching the old house come down.

MDS has many volunteers and donors throughout the U.S. and Canada, and donations of any size are welcome, said Kevin King. “We’re excited for you to move into this warm, lovely, beautiful home above the dangers of being flooded again, God willing,” he said to Mrs. Haugh.

The other houses under construction are on Broadway, First Street and Myrtle Street with foundations for numbers five and six anticipated to start soon. The goal is now eight.

Michele Hughes, chair of ESLTRC, said she was involved with the former Somerset County LTRC “the week after Sandy.” She said it’s amazing to see the support from the faith community. But even after all of the work that was accomplished, “we understood there was more work to be done,” and credits “all of these disparate groups” coming in to help.