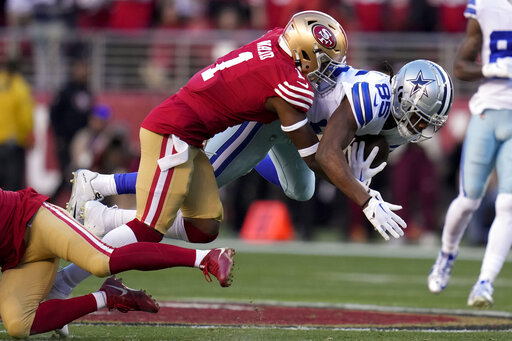 Defense stills wins in the playoffs.

The San Francisco 49ers and Cincinnati Bengals advanced to the conference championship games with excellent defensive performances on Sunday.

While high-flying offenses led by star quarterbacks get most of the attention, defense matters.

It was evident in the NFL divisional round this weekend.

“We focused throughout the week, especially on the week we had off, focused on maybe punching the ball a little bit more or hop on the ball or just catching the ones that they give us,” Chiefs linebacker Nick Bolton said. “I dropped one early, but it’s one of those things you kind of have to keep going on, and in playoffs, you understand that they count times two when you get them.”

Jalen Hurts and the Eagles’ offense were unstoppable, especially dominating the Giants on the ground with 268 yards rushing. But Philadelphia’s defense, which was No. 2 in the league this season, was downright nasty in a 38-7 rout over New York.

Coming off an impressive 301-yard passing game in an upset over 13-win Minnesota, Daniel Jones had no chance against Haason Reddick and Philly’s ferocious D.

Jones was sacked five times, threw a pick, completed just 55.6% of his passes and looked lost. The Eagles held the Giants to only 227 total yards.

“Jonathan Gannon puts these guys in great positions,” Eagles coach Nick Sirianni said of his defensive coordinator. “Obviously, we have great players. ... But this guy is an unbelievable coordinator. ... He’s going to be a head football coach in the National Football League because of what he does. This guy is a stud. He’s a stud.”

Cincinnati’s defense had the most impressive all-around game of all, considering their opponent. The Bengals shut down Josh Allen and Buffalo’s dynamic offense in a 27-10 win. The Bills were only 4 for 12 on third downs, went three-and-out three times and managed just a field goal in the second half.

Defensive coordinator Lou Anarumo put the Bengals in position to constantly pressure Allen and knock him out of rhythm. Allen only had one turnover late in the game but he misfired on some throws and didn’t click with his receivers. Allen kept his head down and didn’t look up when wide receiver Stefon Diggs approached him on the bench and yelled a few times in his direction midway through the fourth quarter.

“He wants the ball,” Allen said of Diggs, who had just four receptions for 35 yards. “And whatever it was that we couldn’t get him the ball tonight, we’re going to have to learn from.”

The Bengals will meet the Chiefs again in a rematch of last year’s AFC championship game that was won by Cincinnati. Burrow is 3-0 against Patrick Mahomes and the Chiefs.

In the final game of the weekend, the 49ers’ top-ranked defense flustered Dak Prescott throughout a 19-12 victory, forcing two interceptions and holding the Cowboys to just 282 total yards. San Francisco had a few more opportunities at turnovers but couldn’t hang onto to a couple picks.

“I’m pretty sure DeMeco is gonna have a head coaching job after this year,” Niners defensive back Jimmie Ward said. “You see it with the play calling. We went out there and shut down a playoff team and one of the best teams in the league this year.”

Next up for the 49ers is a trip to Philadelphia to face one of the league’s most well-rounded offenses in the NFC championship game.

“Get ya popcorn ready, man,” Ward said. “Heavyweight fight right there. Get ready. It’s gonna be a good show.”