A sacred homecoming for Harriet in Cambridge

Two years ago, Adrian Green Holmes had a vision of erecting a permanent statue of Harriet Tubman at the Dorchester County Courthouse, the very site where slave auctions had once taken place, and the …

A sacred homecoming for Harriet in Cambridge 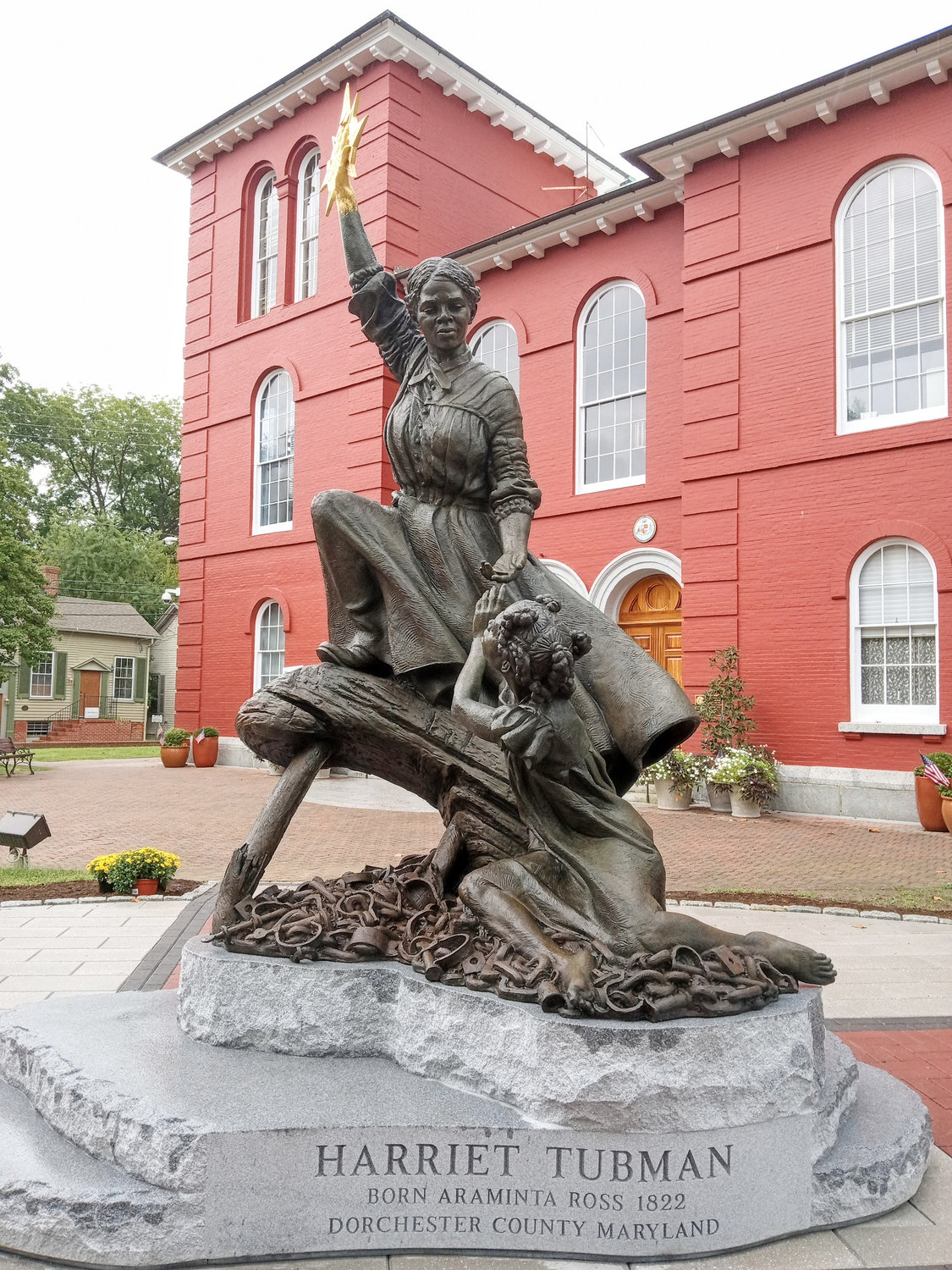 Debra Messick Photo
"The Beacon of Hope" by Wesley Wofford was unveiled Saturday at the Dorchester County Courthouse. 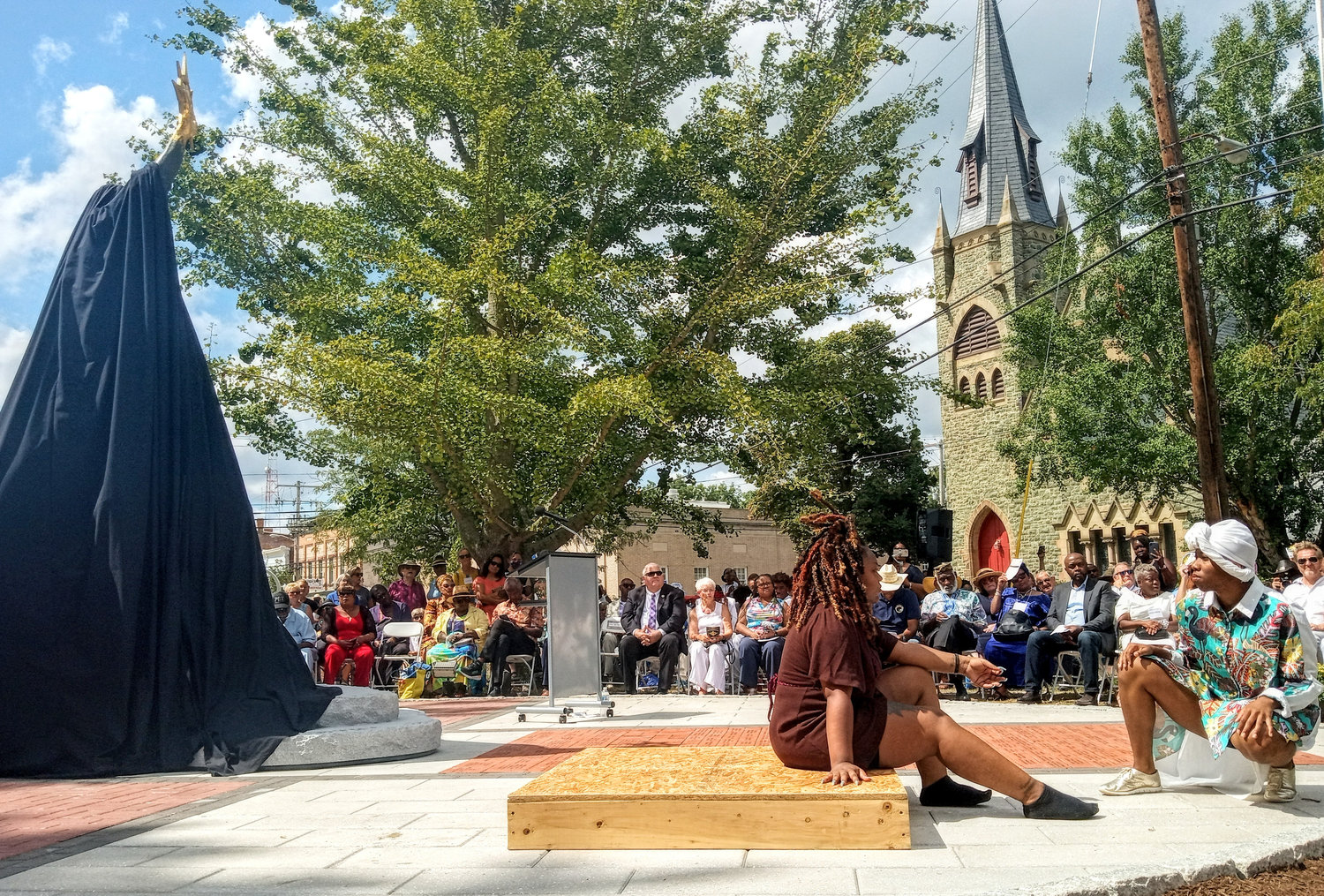 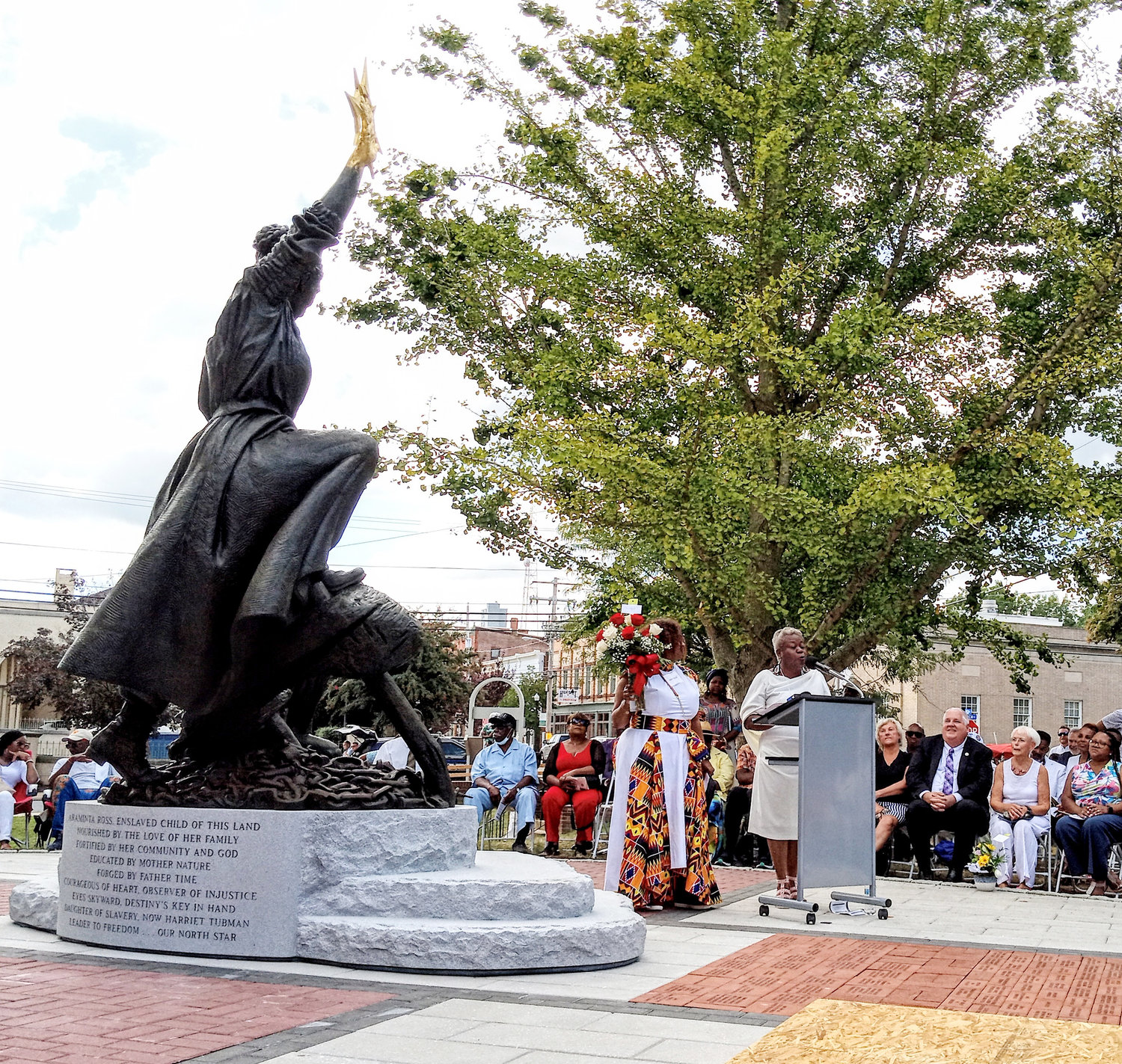 Debra Messick Photo
Adrian Green Holmes, Alpha Genesis Community Development President, thanks the many community members, elected officials and others who assisted in bringing "The Beacon of Hope" to the Dorchester County Courthouse, and gave special appreciation to her organization's vice president, April Byrd (holding flowers). 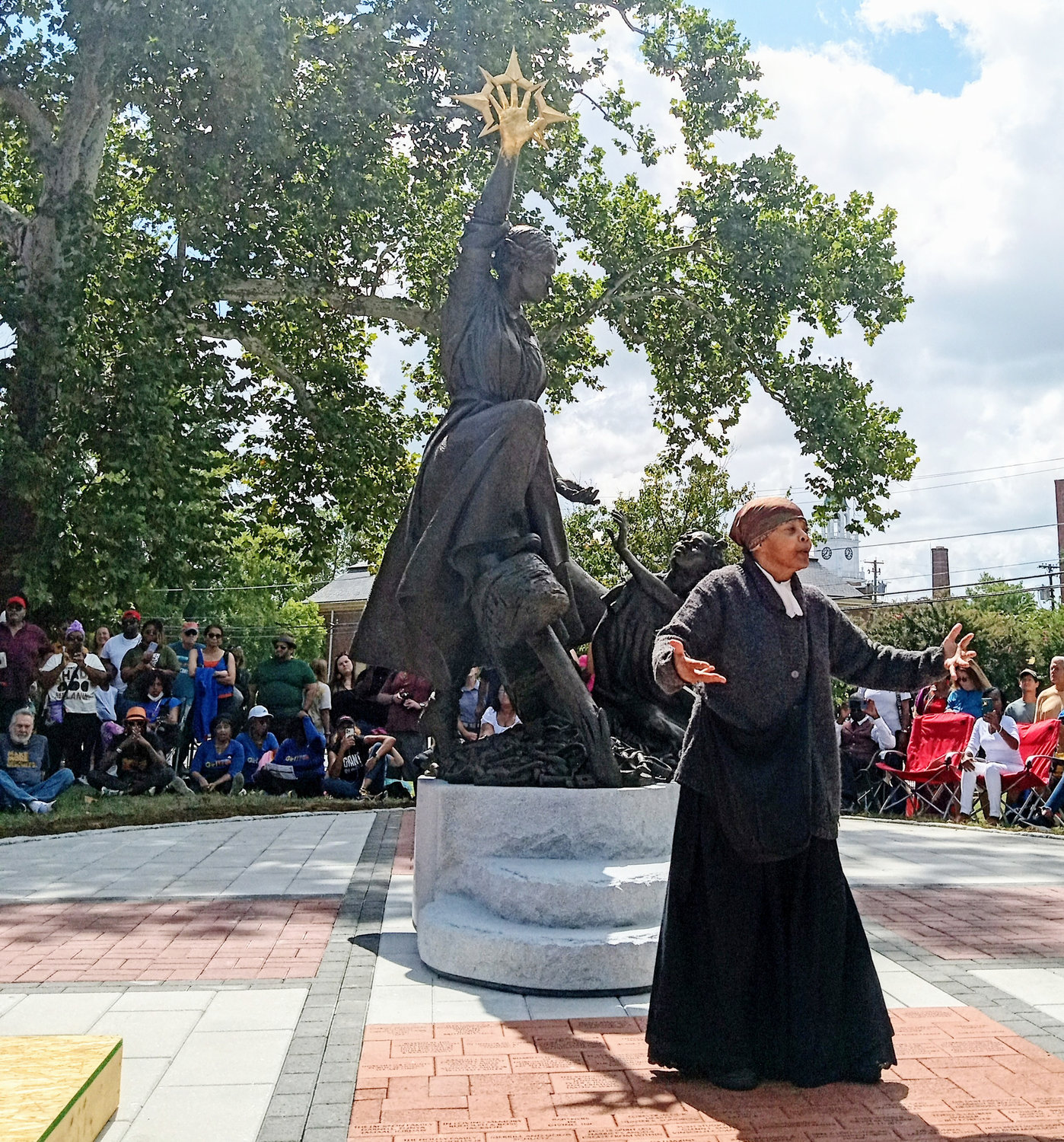 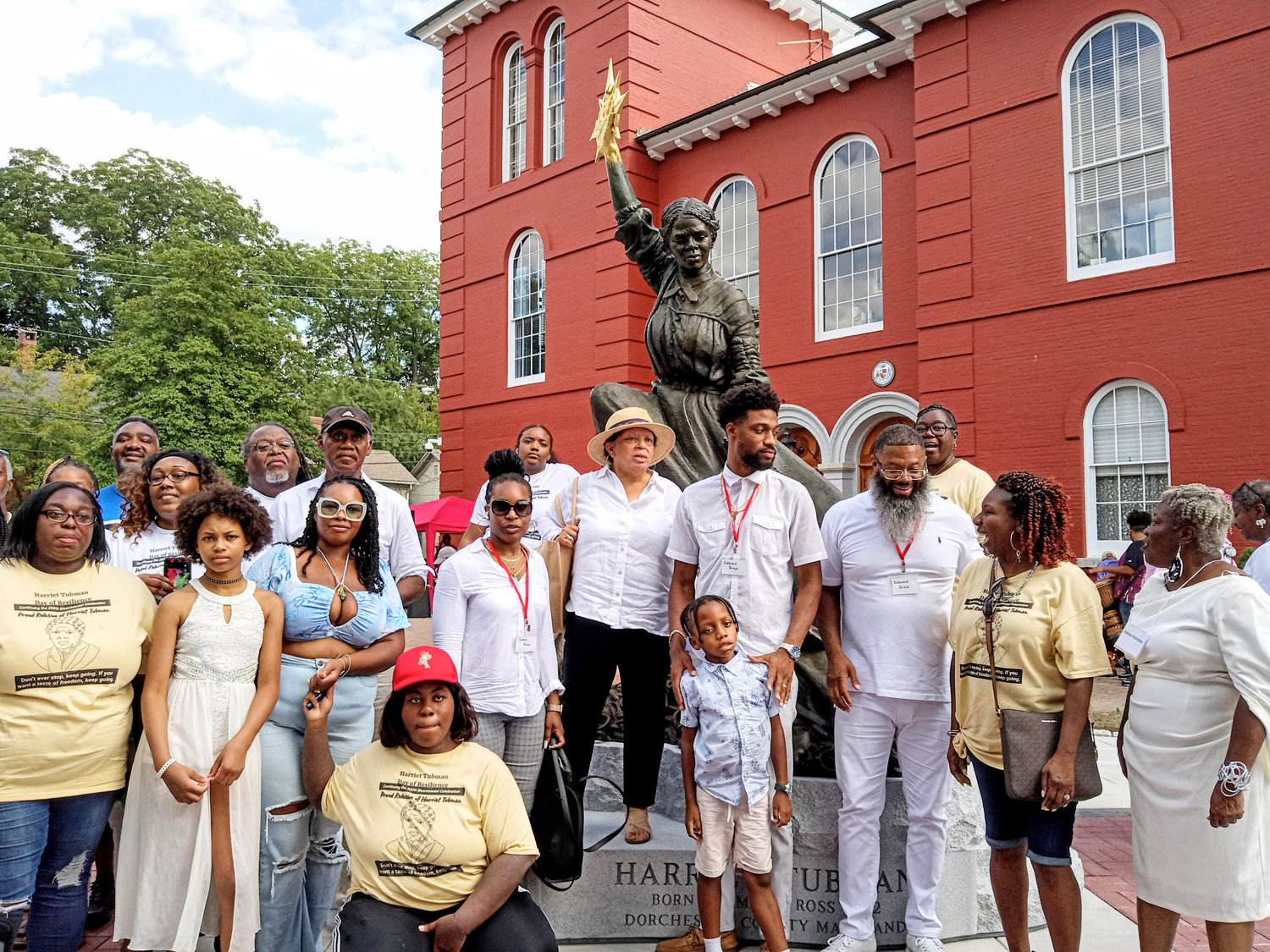 Two years ago, Adrian Green Holmes had a vision of erecting a permanent statue of Harriet Tubman at the Dorchester County Courthouse, the very site where slave auctions had once taken place, and the scene of one of Tubman's first successful slave rescue missions.

The stunning,13-foot bronze sculpture created by North Carolina sculptor Wesley Wofford and fittingly titled “A Beacon of Hope” arrived at the site several days in advance of its scheduled ceremonial unveiling, which took place precisely at noon Saturday, Sept. 10. The sculpture's official dedication was part of a weekend of festivities; it served as focal point for the city's fourth annual Day of Resilience, begun in 2019 to commemorate the 400th year since the start of the Transatlantic slave trade.

The rousing rhythm of celebratory drums played as the hundreds of chairs covering the courthouse courtyard filled up with dignitaries, elected officials, community leaders and a throng of Tubman family descendants. The portion of High Street blocked off to traffic for the occasion was filled well before noon with eager onlookers.

Some arrived dressed in Sunday best suits, defying the mid-day sun's heat. Many others wore either pure white or colorful African garb. Several women delighted the crowd by appearing in suffragette-era costumes, a nod to one of Tubman's many activist roles throughout her long life.

From an altar bearing numerous symbolic artifacts, African diaspora spiritualist Nana Malaya performed the traditional practice of a libations offering to open the ceremony, followed by an opening prayer from Reverend Keith Cornish, who invoked Job's words: "Though a tree be cut down, yet, it shall sprout again. May this sprout, this monument, be a place, just as Harriet was able to take a spark of imagination to create a harvest of hope, of inspiration, reflection, reconciliation and a call to action."

April Byrd, Alpha Genesis vice president, recalled how "two years ago, sitting right here, was a traveling statue of Harriet Tubman, also by Wesley Wofford, The Journey to Freedom, on loan to Cambridge for 30 days."

"On that rainy Saturday morning when they came to get the statue, the people of Cambridge were very upset, very emotional," Byrd said. "They demanded that we have a statue of Harriet of our own. What they didn't know was that standing there were two firm members of the never say 'I can't' club, Adrian Holmes and Jermaine Anderson."

During the ensuing two-hour event, guest speakers were interwoven with performing artists powerfully bringing Tubman and her times to vivid life through interpretive dance, song, poetry and spoken word reenactment.

Vince Leggett, founder and president of Blacks of the Chesapeake, told the crowd, "We are standing on sacred, hallowed ground." He described the difficulties facing those trying to discover African American history and heritage.

"So often, it's hard to find the actual landmark, or determine the exact property line marking where one person's field started and another's ended."

Even tougher is the concept of erasure, he added. "That means that once we were here, but somebody 'airbrushed' us out of the picture, out of the book, out of the movies."

Leggett then introduced Tubman descendant Edduard Prince to "tell the true story about what happened right here, at this latitude and longitude."

"Family and friends, I'm the fifth grand-nephew of Harriet Tubman," Prince began, and was immediately met with applause and cheers.

"It's so befitting that a statue has been erected here, because this marks the site of her first rescue mission as a conductor of the Underground Railroad," he said.

"Her niece, Kessiah Bowley, is my great-great-great-grandmother. Aunt Harriet had already escaped to freedom and was living in Philadelphia. But once she learned that Kessiah was going to be auctioned off at this courthouse with her two children, she and Kessiah's husband John Bowley devised a rescue plan," Prince continued.

Noting that Tubman hadn't yet acquired the skills to slip in and out of enemy territory without being detected, Bowley "stole them away without payment from the courthouse, hid them in a nearby house, then at night got them on a boat up the Chesapeake Bay to Baltimore, where they met up with Aunt Harriet, who would later take us to Canada, where my great-great-grandfather was born," he said.

Though the family returned to Cambridge after the Civil War, they relocated to Washington, D.C., and Baltimore since the early 1900s, when Prince's ancestor was asked to join Woodrow Wilson's administration.

"So, this is my first time back to Cambridge, and it's a little overwhelming," he said. Stating that "the fight continues," Prince asked those attending to support HB 594, the Harriet Tubman Community Reinvestment Act, a state reparations proposal for anyone able to prove their ancestors had been slaves in Maryland.

Following the removal of the statue's black shroud covering, Tubman re-enactor Millicent Sparks spoke directly to the crowd about how her heroic spirit evolved.

"My old master was fixin' to sell me and my true brothers. We runned off in the night, but they turned back, fearin' what the master would do when he caught them," Sparks said, then continued, "I fixed my eye on the North Star, and I kept on goin.' I done reasoned it out in my mind, there was two things I had a right to, liberty or death; if I couldn't have one, I'd have the other. For no man could take me alive!

"So I walked and walked and walked, and I made it to Philadelphia. I was free! But my family was all down there. So I made this solemn resolution, that with the help of the Lord, I would go back down and get 'em and carry 'em to freedom. T'was the Lord who sent me back, for Kessiah and her children, right here, up on the auctioneer's block at this courthouse," Sparks said to resounding cheers.

She ended with an impassioned message to today's children, parents and teachers, that slavery is still here today, saying, "It's whatever owns you, child, so you don't own your own self." But, she added, the Underground Railroad is still here, too, in the form of education. "The more you get, the freer you stay," she said, urging adults in their lives to serve as conductors. "These children wake up free every morning. Keep 'em free! Freedom gives 'em choices, education helps 'em make the right ones," Sparks concluded, greeted by thunderous applause.

Sculptor Wesley Wofford thanked the community for "guiding my hand" to create the statue, suggesting that it could serve as a nationwide model of using public art to build bridges of empathy.

Wofford credited Holmes with keeping the project on track for two years, and with realizing as recently as last June that the site needed a bronze book and lectern, telling the story.

Per her suggestion, Wofford delved into some of the statue's symbolism and details.

"The shackles you see at the base, some are opened, while many are closed. Those open represent the people Tubman helped liberate, while those closed symbolize slavery's repercussions into the future that still need to be unlocked. The only way we do that is by all of us working together," Wofford noted.

He also disclosed that the girl below embodies Araminta Ross, while the woman holding the gilded beacon represents the first vision she experienced after being struck by a 2-pound weight thrown by an overseer at Bucktown Store.

"So, this represents her first vision of her future self, who is handing a generational golden key to her younger self, as if to say, 'You're gonna need this now, and even 200 years from now, the key to reach within yourself to become that woman," Wofford said, adding, "Harriet used the North Star to navigate out of Dorchester County, so her hand is a compass rose, facing due north."

Judge William Jones spoke of the statue as an ever-present moral compass, "constantly proving to us that, though there may be so much more to do, doing better is always possible, especially making justice for all a reality."

Keynote speaker Samuel C. Still III, descendent of Civil War abolitionist William Still, spoke of the ongoing need for what late Congressman John Lewis called “good trouble” as well as "taking a lesson from our ancestors that we must stay resilient, encouraging and educating young people to do so."

Melvin Foote, president of the Constituency For Africa, presented guest officials representing Mozambique, Congo, Togo and Sierra Leone, the latter noting a deep connection between her nation and Cambridge. Relating that the majority of slaves came from her nation, many may have been led to freedom in Nova Scotia by Harriet Tubman, but ultimately were able to return to their original African home.

After receiving accolades from many throughout the day, Holmes, in her closing remarks, returned the favor, glad for the chance to publicly recognize the many whose help and support she was grateful for – family members from Philadelphia, the Maces Lane seventh-grade teacher and students who, in 2020, decided to write a book and raise money to “Bring Harriet Home,” sculptor Wofford who, that same pandemic year, provided Zoom art classes for students, and community leaders like Donald Pinder and Shirley Jackson who “took us under their wing.”

"Our elected officials and County Council wrapped their arms around this project, and I thank you so much, along with Judge William Jones, Brett Wilson and Melvin Jews," Holmes added.

Noting expenditures doubling because of the pandemic, supply issues and inflation, Holmes thanked Rick Breeding Excavation for "jumping in with heavy machinery" helping clear the installation site, also thanking Fields for providing hands on know-how steadily over the past three weeks.

Thanking those who had contributed financially by purchasing a commemorative brick, she asked those still wishing to do so to visit alphagenesiscdc.org.